A downloadable Visual Novel for Windows, macOS, and Linux

Riley is a completely unremarkable woman, if you were to ask her.
A plane ride towards a job that could change her destiny ends in disaster
when there's a critical engine failure during flight. It would be the end
for Riley too, were it not for a remarkable woman who claims to be
from the year 2165. The protagonist. Riley was a sous chef for years, mistreated and underappreciated in the kitchen. The very day she was going to interview for a position as head chef at a fancy restaurant, she was in a plane crash and died. Or she would have been if she wasn't brought to the future. But in this world, cooking is a dying art, and she's the only one who can revive it. She decides to attempt being a professional chef again in an attempt to prove she can make a significant contribution to society. If she can't, however, the consequences could be far more severe than just having to go back to school. A historian from the year 2165. Her job is to travel back in time and investigate events that happened in the past without disrupting the future. She's a fun-loving woman who knows what she wants, and isn't afraid to go after it. Finding Riley has made no significant contributions to society, she decides to bring her into the future to allow her a second chance after hitting it off on the plane. The head historian and a very strict, serious woman. She doesn't appreciate Max's nonsense and if the woman wasn't so good at her job Cecilia would have fired her long ago. She respects confidence and intelligence. Her outwardly frigid demeanor might make it hard for people to get a read on her, but Cecilia isn't afraid to speak her mind and make her thoughts known.

I thought there was just an early bad end, a late bad end, and an end for both characters.  Then I saw that the last ending I got was NUMBER NINE...  I'm going to regret this greatly but I'm considering making a flowchart and brute forcing all the endings.  I like this game but holy carp it's gonna be hard to find all the endings.

Oof~! Those first two endings hit me hard! I almost cried during one!

I got the first then the second then I pondered what I did wrong and tried doing whatever and it ended out working! (somehow)

First I'd like to say that this game has an utterly fantastic story that really captures a lot of emotions. I'm usually not one for dating sims so I only went the Max route (ending 4? maybe there's another). That said, the game's writing is really good; the plot develops the relationship as it goes through and the MC has a nice and gradual development. Although I can't say her character development was perfect, there were elements that seemed a bit quick or sometimes drawn out. It worked in some areas to draw out her emotions; it making a lot of sense why she'd be so apprehensive, but a few times it just didn't fit right. The plot as it is is a tad weird; some points have tangents that don't do much down the line, I get some as they are for the whole dating sim bit where you choose a character as your end goal, but sometimes it was weird (maybe I'm incorrectly remembering from playing it a few dozen minutes ago).

The characters were all pretty well written: Max fit her role and stuck to character (save for a little bit to do with the relationship between herself and Riley at the time but that didn't make much impact and worked either way) and was a solid character through and through. Cecilia was a nice older-sister sort of character who was strict but felt like there was a lot behind that and she flashed that part of herself when she got to know Riley. And of course, the best girl, Riley; she's probably the best character who has a lot of feelings she has to figure out before she can get on with her life. Her development is great and her general writing and personality is interesting to see. A lot of small things were added into everyone which added a nice little layer that made them all a lot more... what's the word... interesting? Gripping? Whatever it'd be, it made them all so much better.

Might I just say though; Eric or Mason or Gideon or whatever his name was was a bit out of place imo. He came out of nowhere and had little plot relevance (even at the comforting scene where he was more comforting in a partially unrelated note than what was actually wrong). He's not a bad character, I just didn't see what his purpose was. I honestly thought that Riley was going to run into Emma again since she told her to talk to her any time (though then I remembered that Emma is from 1800 and thus might not be a good idea because of the social climate at the time... but having lived in future-vill for three years, she's likely picked up a lot of acceptance for that sort of stuff).

Anyways; dribbling opinions aside, I might have gotten to this game quite late but it's truly spectacular. I'm adding this to my replayible list and I'll most certainly revisit it (and maybe find out how those other endings work; I swear these games I've been playing have the hardest to find endings...). I suggest this to anyone who likes yuri or a nice little emotional journey.

Great job Fablesoft Studios and all who were involved in the making of this game; you've made an amazing experience!

And... Chicken Parm? I've heard it called that, like, twice... is it really more commonly known as that?

Can you please put out a guide for the endings? I can't figure out how to not die.

i'm sorry but this comment is so funny to me

are there any endings that are less ambiguous whether you hook up with one of them or not? and how do I get them(im trying to go for a specific route but I dont know if there is one and I cant figure it out). great story btw the characters are fantastic

Yes, there are romantic endings! I'm glad you enjoy it. As of now Plain doesn't have an ending guide, unfortunately!

I really  liked this story!

At first (intro) I was scared that the main character (Riley) would be a Mary Sue type, but fortunatelly that wasn't the case at all.

I would like to communicate with the creators of this game, is there any way?

Hi! Sorry this took me so long to see. I'm one of the creators, what did you need?

Really good game :3
I got differents ending but not all of them (I miss 5 to 8) and I'd be interested to see a guide too ! :o

Wow. Another great game of yours'

I really like the plot.  Great and original story idea. Multiple meaningful choices. A lot of endings. And even plot twist :)

I like how great characters are. Each of them with own style, personalioty and story. They look good too.  My favourite character is Max :). She is gorgeous. I like her style and how honest, sexy and generally interesting.

But I have few question:

Can someone write guide how to get all of the endings? Or at least give some good hints for each of them?

I'm so glad you enjoyed! Thank you for your wonderful feedback, sorry it took us so long to get back to you.

There are 10 endings! Yes, you can romance Cece as well. Unfortunately there isn't a guide, but here are some hints to get on her route:

Ask about Cecelia and Max

Thx for answer but I know to unlock Cece's route. -,-

I meant, guide for all the endings...

Oh, sorry! Uh... I'll get back to you on that. A couple of people have asked about the endings so I'll try and put something together when I get a chance!

images in discription are not working

The images have been fixed, thank you for pointing that out!

I just finished it, getting ending 9. I guess that's good? Regardless, I really like the game and the characters themselves, Cecelia especially. ^^

Thanks so much for playing! I'm glad you enjoyed it ^^

Do we have any control over the MC'S personality?

No, sorry! The choices only affect the flow of the story, not Riley's personality.

I honestly don't know why I haven't played this before! I love the storyline and the protagonist is very well written. The characters are  all very relatable. The art iswonderful! I also loved the few pop culture references in there!

Concrit: There are a few spelling errors and such, here and there, which are slightly distracting.

Hello, I'm an artist for fablesoft studios. Thank you so much for taking the time to play through and comment! Sorry about those errors, we'll check through again when we have a chance.

Frankly, this game was so much more than I expected it would be.

The conception, the writing, and the art is so lovely, immersive, and original. I really appreciated the diverse characters, and beyond that, they're all so likable and believable! (Though nothing is less believable than when Riley says she isn't gay, like, girl... lmao...)

Thank you for taking the time out of your lives to create and share this game with us (and for free!!) because it's really been a great pleasure to play it. I really look forward to seeing all the amazing things I'm sure your team will accomplish!

I'm an artist for fablesoft studios. Thanks so much for your lovely comment and for taking the time to play through! I hope you enjoy the future games Fablesoft studios has in the works.

Thank you for making this game. :) The story is amazing. And the plot twist and the feels... uh!

Thanks so much for playing! We're so glad to hear you enjoyed :D

Reply
Pixels and Pins5 years ago

Do you have any problems or policies regarding Let's Plays? This one in particular would be part of a series, only feature the first 2-3 hours of one route, and link back here.

We're completely fine with Let's Plays! Please do, we'd love to see it, too. :)

Reply
Pixels and Pins5 years ago

Hello! Nevina (Fallingmist on DA) and myself are going to be hosting a PG-13 yuri-jam panel at Yurithon in Montreal this August (yep, we got permish) and we were wondering if it would be ok to demo your awesome game. We've also contacted a few others so that the crowd can have a choice, or possibly if we have the time, we could demo all of those who say yes 8D

Hello! Oh wow thank you so much for the offer! It would be so great if you could demo Plain :) We're fine with it! If possible could we hear back about the reception of the game?

Aaaa thank you so much for your permission! We'll encourage everyone to play through themselves and leave comments~

Thanks so much! I'm one of the writers, really glad you enjoyed!

Sorry for the (long) delay, the game is up for download now! 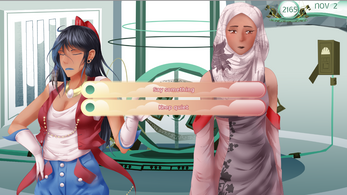 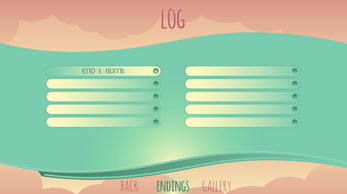 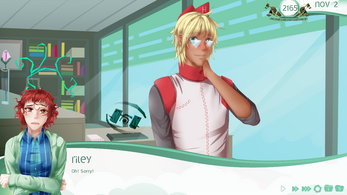