A downloadable game for Windows, macOS, and Linux

Update 5/28: Fixed a bug where the game wouldn't open!

Dive in to the mystical land of Ellaria, where Elves, Fairies,
and Demons rule supreme, and other races are no more than
an afterthought on the authors fingertips. Enjoy a tale of action,
adventure, romance, and a whole lot of snark. Bring your armour
folks, lest you get injured by all the fourth wall breaking.

The nameable protagonist, an elf who loves adventure,
and has trained hard to get where she is today as one of Ellaria's
most beloved rangers. She puts on a humble facade for the public,
but loves the attention. Despite their disagreements, there's nothing
she'd rather be doing than travelling the land with her two dear
friends. Even when they really, really get on her nerves.

A mischievous girl who will always prefer getting things done
to sparing people's feelings. Ruthlessly violent in battle ('sour' cream),
but adorable everywhere else ('whipped' cream). She likes to put on a
cool face for her fans. She can seem a little inconsiderate, and abrasive,
especially to those who aren't used to demons and don't now anything
about their culture.

A fairy who, while he has a lot of respect for his culture and
teachings, dislikes the fact that the only type of magic he can do is
healing. His team members insist that's all he needs to do, but he wants
to feel more useful. He doesn't like running straight into danger and
is exasperated every time Cream and Toffee do so. Is nice to pretty
much everyone but his friends.

Your guide through this journey, who isn't afraid to tell you
when you've made a terrible decision.

Join Toffee, Cotton and Cream as they valiantly search for the
legendary sword necessary to rescue the princess, who has been
kidnapped by unknown assailants. And so long ago, she's probably
very dead. That won't stop our heroes from boldly going where no
elf, fairy, and demon have gone before. Of course, it's not really
about the spoils. It's about the quest. ...And the spoils. Because
they are quite broke.

Ellaria is home to eight races in total, but the three with the most
territory are the elves, the fairies, and the demons. While elves keep
mostly to themselves, doing some trade with the fairies, it doesn't take
much to spark a conflict between the demons and fairies. Our heroes
mark the first group of all three main races, and bring hope that the
land may one day be united.

Magic has, from the beginning, been a large part of the world and
how it and many of the races function. There are races that magic comes
naturally to, such as Fairies and Elves, and other races that cannot
master the use of natural magic such as Dwarves and Demons.

Did you enjoy it?

Who was your favorite character?

What parts could be improved?

Would you like to see more games from Fablesoft Studios?

Did you have trouble getting all the endings?

Send any bugs or issues to: FablesoftStudios@gmail.com

I've had this game on my to-play list literally since it came out 4 years ago and I finally, FINALLY got around to playing it as I started to get through my backlog this year. I really enjoyed the game's humor and fourth-wall breaking (Narrator was SO funny). I liked all of the routes but honestly I think the secret route was my favorite. Thanks for a great game and I look forward to continuing to play your awesome games! (:

Hey I'm not sure if y'all are still checking comments on this game but I really enjoyed playing Especially Cotton's route his such a cutie :) I wish it had a 64bit version though

can't get to cotton's route, even when following guide.

That's odd, does an error screen come up or anything?

nope, it just, doesn't happen. Which is so weird. Like it'll just make me go to Cream's route

Hmm, I will look into this, would you mind telling me what version of the game you have?

the one that's up now. I got the PC and Linux one

Ok. I'll answer your questions in order. (in my subjective, personal opinion)

2. Hell yeah! OMG! I love Cream. I love her look and style, and how loud, honest, silly, hard, brave, childish, strong,  funny and interesting person she is. She is the best.

3. Her route is my very fouvourite.  Her route would be perfect if it'd be option to save her and MC. Tha's the real reason why I played this game and only one I was really interested in.  Her route could be longer, expanded and with "truly" happy ending. Of course I like the plot, funny dialogues and Toffee is great too ;). I don't like her + Cotton realationship. She fits perfect for Toffee in my opinion.

4.I don't like Cotton and his route (I haven't got any ending with him beacouse I always prefered Cream). His clothes are too pink and not enough "male". His personality may be interesting but not his look.  And I am that kind of person who like gxg routes the most (or rather only). Yeah, that's why I don't like Licorine too(but only a bit - he's ok). Yeah I don't like secret too.

5. If I were you, I'd improve two basic routes, especially Cream's :D or create gxg only version of this vn xD haha But seriously it's not much to improve and game is great this way.

6. Yes I would. At least as long as they have at least 1 gxg route and as interesting characters, plot and artstyle as this one :)

7. I had no trouble with getting all the endings I got. But I know that in all the secret route's ending I could have problem without your little guide. It was really helpful :). But you could tell (in guide) that secret route is based on new male romance character for Toffee and Cotton + Cream relation before. I had no idea what I was starting unlocking it. xD Even if I would not play it beacouse of it. Really I though that secret route gonna be based on Cottons' or Creams' 2nd routes but with new plot. :)

In summary: I enjoyes this game. It's great. I love Cream and her route is nice. I don't like Cotton and L  and their routes and secret one. There not much to get ploshed in game. Great plot. I'd love to see you guys create gxg-only game :)

I'm the artist! I'm so happy you liked Cream! She was really fun working with. I'm sorry you found Cotton's route lacking. We have in fact made an all GxG game, you can find it here: https://fablesoft.itch.io/plainvn

Thanks for playing and leaving feedback!

His route is not lacking. It's ok.  I just don't like him.

You did great job as artist.

I've downloaded the file but I cant open it because it keeps giving me the message ''No excutables were found''. I can open the guide but not the game itself.

I am the artist, thank you for telling me this! I think when I updated it recently I messed something up. I will be re uploading it soon. Thank you!

BWAHAHAHA. You, Game Creater, are a GENIUS!!!

Okay, I've been playing this game for all of 5 minutes and I'm LOVING IT already. I can.... hear... Cotton's voice in my HEAD... and... I can hear him already complaining about how much a deep pore cleanse for his soft white skin is going to cost... I LOVE IT!

Hi I'm the artist! Thanks for your comment, so glad you're enjoying so far xD The mad libs definitely made testing a blast. I hope you like the rest of the game!

Hello - you're a fabulous artist - clean lines and the facial expressions really made the characters.  I wanted to get in touch with you regarding your work - but it would seem your patreon page isn't loading?  Is there another way to privately message you either on here or...?

Oh thanks so much! You can message me at aferalcircus@gmail.com.

Who was your favorite character?: Either Licorice or Cream. Licorice because his personality was strangely endearing (his strange mannerisms and such really made me like him, for some odd reason) and Cream because I relate to her a lot (not the whole buff and strong part, but rather the "wants-to-fight-everything" and nonchalant attitude).

Favorite part?: Definitely all of the characters interacting with each other. (I'll admit that I had a soft spot for Cotton x Cream from the first play through and was verrrrry happy when I discovered their ending).

Least favorite part?: I realllllly wanted to know more about Licorice. Why "Jeffery"? What exactly was his childhood like? Do him and Toffee ever get married? (These are all very important questions, I promise^^)

What parts could be improved?: The dialogue seemed a little iffy at times, and some of the transitions from scene-to-scene seemed strange, but other than that I loved everything! (Well, there was also a strange bug during Cream's route where you both get in the hot springs and Toffee doesn't have any hair. That was kinda scary.)

Would you like to see more games from Fablesoft Studios?: Definitely!

Did you have trouble getting all the endings?: Not in particular. I just went through and replayed different routes while choosing different choices to get all of the endings :)

Glad you enjoyed it! I have to tell you I could not stop laughing when I read your comment- I realized what had happened immediately xD Sorry about that! It's all fixed now if you'd like to download a version that has hair LOL

I keep getting an error that's making it impossible to continue on. Happens right after the end of the general choices when the Narrator says, "But... how to decide?" As the full traceback is... long. I've edited it down to the bottom entries only. Let me know if you require more. Here's what it says.

An exception has occurred. While running game code: NameError: name 'thair2f' is not defined

NameError: name 'thair2f' is not defined

Ah, I'm so sorry for the error!
We've had a few others tell us about the same thing, and we're trying to fix it but we aren't sure what's wrong. We're unable to reproduce the error, but once we figure it out we'll post the updated version right away!

Thank you for letting us know, I hope other routes will work for you.
- Averxy

The bug has (hopefully) been fixed, and the game updated!

Redownloaded it and tried again but it's still doing it. Should I try to delete all the files everywhere and then download it again? o_O I'll try doing that when it isn't so late. XD;

Well I did get around to flat out deleting every file for the game and downloading it completely new. It doesn't seem to have fixed my problem, just changed it. Now instead of getting the error, right after the Narrator says, "But... how to decide?" I click, see Cream laugh, and then it instantly sends me back to the title menu.

I'm sorry, I totally missed this comment. I'll have to keep working on this, because I kept getting this issue, but in the last update when I played through it worked fine for me ; ; I'm sorry about this, I'll go through it again and see if I can pin down what the problem is. 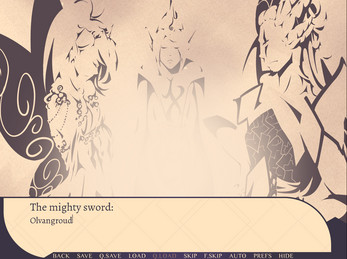 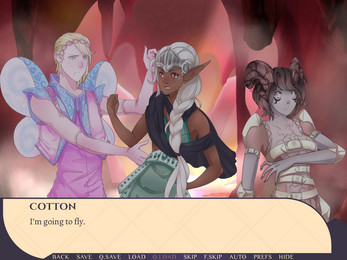 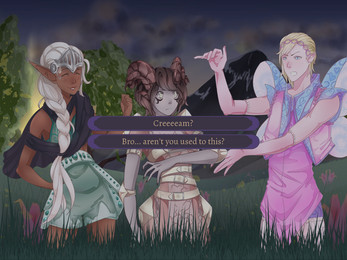 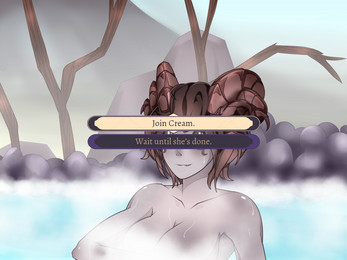 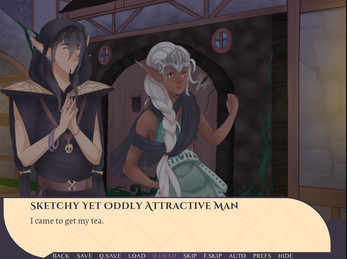